This past week has been pretty exciting. We've been studying so much for our midterms, and in the middle of life we had to take a break for Dengue Fever. 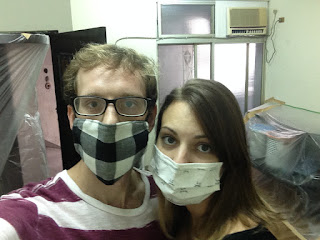 All Saturday morning we studied. In the afternoon, we decided to take a break for an hour a two to get some fresh air. When we got home, we found a pink paper with an official notice on our door, which was written entirely in Chinese. The only recognizable thing on it (besides the few characters we've learned) was a picture of a mosquito in a circle with a line through it.

We've seen many posters around talking about mosquito prevention because of the problem that Taiwan has been having with Dengue fever this year. It's a disease spread by mosquitos biting infected people and then in turn biting others. Over 25,000 people in Taiwan have become infected since May! We thought maybe this notice was just some good information about prevention. After checking with a Taiwanese friend the following morning, we found out that someone either in our apartment building or in our neighborhood has been diagnosed with Dengue fever. The government had issued a warning to us and our neighbors that they would be sending people to inspect and to spray everyone's homes the following day. If the inspectors found any larvae in anyone's home, they would be subject to fines. If anyone was not at home when they arrived the next morning, they would call the police to break in. 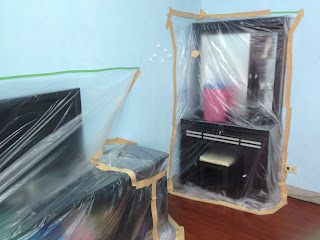 Sunday night we had the privilege to be Skyped into a church's mission conference. We were planning to prepare for that and to study most of the afternoon. However, it turned into us buying plastic tarps and tape. We spent the rest of the day cleaning our house and covering furniture and all our belongings with plastic to protect them from insecticide fumes. We were worried that the toxins from the spray would make us sick. Monday morning we also had to miss the first hour of classes to let the inspector and bug killers in.

Other than how time consuming this endeavor was, it is a somewhat scary thing for us. We are in a foreign country, we don't know their regulations on bug chemicals, and also Anne Marie has the gift of attracting mosquitos to bite her legs. There is also a frustrating side to this; our home is clearly not the problem as it has always been mosquito larvae free from how clean it is, however they sprayed everything in our home anyway. Also, in our courtyard there is standing water in the floor drains constantly which is the most likely place mosquitoes would breed, but they didn't even bring up that issue as far as we could tell and left the standing water there to continue as a breading ground.

After school we opened all our windows in an attempt to air out our apartment. We then spent all of Monday afternoon cleaning the walls, floor, and other various places. So far neither of us have shown any symptoms from this disease and we pray that we never do!

Connect to our Ministry